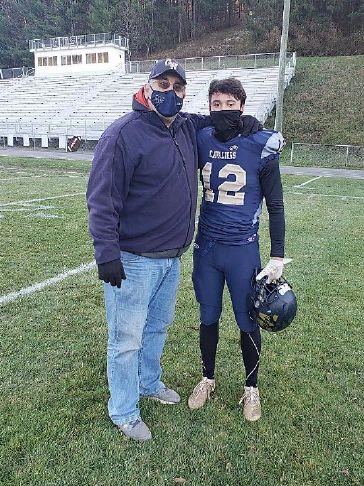 CHARMCO, W.Va. — Football has been in the Vaughan family for years.

It might have seemed like a slam-dunk that Kelly’s son, Lawson, would be a football player growing up.

It sure didn’t happen that way.

Lawson grew up with a ball in his hand all right, but most of the time it was a basketball.

“I just never really got into football,” Lawson said. “I was always around it, but I loved playing basketball.”

The rest, as they say, is history.

Lawson is in his second season as a starter on both sides of the ball and this year leads the Cavaliers with 18 catches and 352 yards receiving. He has caught a touchdown pass in each of West’s last six games.

“I said I only have two years left and I wanted to give it a shot,” said Lawson after practice Tuesday about his decision to try the sport where his Dad excelled.

Now the basketball guy turned football player is only three wins from a state championship as the Cavaliers prep for a home quarterfinal match-up against Ritchie County Saturday afternoon.

While making memories with his buddies on the field has been cool, even more special is the relationship with his father and a bond cemented by the Friday night lights.

“It’s been awesome,” said Kelly, who has been the defensive guy on the West staff for all but two years since 1991. “He didn’t play until his junior year and that was his decision. The coaches love him. He’s a coachable kid. But when we go home, we’re home.”

Kelly, who now owns a property business and a car dealership locally, came home to West after a couple of years coaching at the college level.

At Wake Forest, he played for head coaches Al Groh and Bill Dooley.

Bob Pruett, who won a Division I-AA national championship as the head coach at Marshall in 1996, was an assistant at Wake during Kelly’s time (1985-1988) and hired him as an assistant coach after graduation. Vaughan followed Pruett to Ole Miss a year later.

“Bob Pruett was the guy that recruited me out of West Virginia,” Kelly said. “And I coached with Pruett at Wake and the University of Mississippi. I tried it for two years. College coaches, I’m telling you — it’s 365 (days a year). I like to hunt and I like to ride motorcycles too much for that. Those guys put in a lot of time.”

Kelly has coached two teams at West that played in the state final.

Will this be the year the Cavaliers kick in that state championship door?

“Everybody wants to win and we’ve got a bunch right now that’s got a shot,” Kelly said. “We’ve got good kids that just play hard. And you can coach ‘em up too. They do a great job as far as alignments and techniques and paying attention — and that helps us, it really does.”

College football is probably not in the future for Lawson Vaughan.

“I’m probably going to go to college and study architecture,” said Lawson, a straight-A student. “I’m not really sure on sports.”

And while basketball and college is looming right around the corner, both Lawson and Kelly are ready for the next three weeks to play out.

“These kids here saw that (championship) game (in 2013),” said the West coach. “They saw what happened. We’ve got a nice program and the community really supports us.”

The Vaughan’s would like nothing better than giving that community a state football championship.

Mark Pifer
Related Topics:
Up Next